Take It To The Limit

I watched a documentary on the Eagles the other night and it was an excellent history of one of my favorite musical groups.

They talked about the meaning of some of their songs. “Take It to The Limit”, was one song that was actually written as a message to those who are of an older age. The intention is to not settle for retirement or the “norm” of going home and sitting, but to take life to the limit of your capability and not lose the later years in a rocking chair. The last part of the title is “one more time”, indicating taking action.

The later years of life are very perplexing. Most are disillusioned by retirement and waste themselves away, getting in a routine of some kind that does not move them to new heights or desires. They have all these talents and abilities, but like muscles that are not used, they atrophy.

Ask yourself where you are in this arena. Begin to prepare for the future. Take away the fence that is around you and explore the future. Create something to look forward to. Make lists. You actually probably have time to start a new career. If not, you have time to accomplish a “one-shot” goal.

The term “Take It to The Limit” indicates a risk; doing something you would not naturally do. You could make a “Bucket List” and begin to go through it. Completing items brings a great feeling of accomplishment. You will find that the limit is easier reached than you think.

The Eagles had another song that relates to the “limit”. It was titled “Life in The Fast Lane”. Capturing that concept says don’t lollygag around making something happen. It means that you need to ramp up your efforts. You can still take a nap. 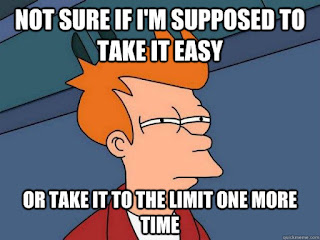 Email ThisBlogThis!Share to TwitterShare to FacebookShare to Pinterest
Labels: accomplishments, bucket list, Eagles, goals, Life in the Fast lane, music, retirement, Take it to the limit